Sort By
Currently Displaying All Results
Back to Top

Saint Lucia is an English-speaking island in the Caribbean. Being under the Commonwealth of Nations, it’s tied to England but it’s also a member of La Francophonie. You’ll have an opportunity to practice for French, and you may also hear Saint Lucian Creole French. The dry season runs December to May and the wet season starts in June and wraps up in November. The heart of tourist season begins in January and tapers off in April. The temperature runs from the 70s to the 80s all year.

In the Thick of It

Being a Caribbean island, Saint Lucia is no stranger to street festivals. There are two rival festivals that might not seem quite right to those who aren’t in on the joke. St. Lucian society has created two bands of “enemies.” La Rosa is a folk festival in August known for music, food, drinking, and theatrical performances that tease and poke fun at the Society for the Marguerite Flower. Not to be outdone, this rival band will show up at La Rosa to return the rebukes and hold their own festival, La Marguerite, in October. This is also a folk festival known for music, food, drinking, and theatrical performances where La Rosa is the butt of the joke. Although these festivals culminate into a finale in August and October, activities happen all year.

The Saint Lucia Jazz Festival is a world-renown music festival in May. Musicians all around the world come to Saint Lucia to celebrate the music. Festivities occur all over the island and culminate into a final group of performance on Pigeon Island, north of the main island.

Carnival, traditionally held to celebrate the time before Lent, was moved to mid-July to give island-hopping travelers more time to celebrate. Gros Islet has a street festival every Friday and the Atlantic Rally for Cruisers finishes in Saint Lucia in December.

In the Air & the Sea

Saint Lucia is a tropical island and as such has all the water activities one would expect: diving, snorkeling, sun-bathing, swimming, boat tours etc. Sugar Beach, a white-sand beach backdropped by a lush forest and a rocky cliff face is not a site to be missed. However, unlike other tropical island, 77% of the island is covered in forest. There are a myriad of zip-lines and treetop tours.

To work off those calories, you can head up to Pigeon Island and tour Fort Rodney. A decommissioned 18th century British Base that was briefly used by the US as a signal station in WWII. You can walk among the ruins, trails, and take is some of the most stunning views of the island.

If you grow weary of all that walking, take a visit La Soufriere, a drive-in volcano.

Land, sea, and air—there’s nothing to not love about Saint Lucia! Take a well-deserved tropical break and book your trip now. Don’t forget to check out our Vacation Planning Resource Center for information to guide you on your next trip! 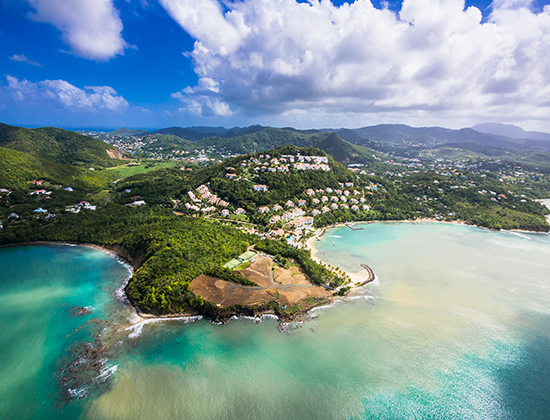